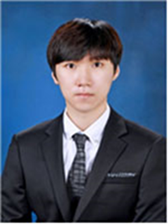 By designing an electrochemical deposition-based precursor synthesis process in order to micro-control based on thermodynamic morphology of Cu-In-Se (CIS), the research team developed a semiconductor structure where secondary phases coexist through the selenization process. Based on that, the team built the pulse-driven system in which enables high hydrogen evolution.

The multiphasic structure has improved the charge transport efficiency due to the expansion of the depletion region formed inside and on the surface of semiconductor electrodes. It can also generate photocurrent at reduction under negative (-) voltage and oxidation under positive (+) voltage due to the presence of multiphase. Consequently, the pulse-driven system is the new mechanism that can fully leverage the entire photocurrent generated out of AC output.


Along with public attention on hydrogen energy in which shows high efficiency as renewable energy to replace petroleum, water-splitting research using light to generate hydrogen is increasingly being active. Thus, research has been conducted on photoactive materials that can generate high current under sunlight. However, it was limited to single conductivity types in which shows very low efficiency of photo-generated charge transport due to the neutrality of the inner area of absorbers.

Consequently, the researchers, by focusing on the development of multi-phase chalcogenide materials that enhance charge transport efficiency, enabled utilizing both photocathode and photoanode by controlling the precursor synthesis and selenization process.

The paper was published online in January 2021 in Applied Catalogis B: Environmental (IF 16.683), a SCI journal within the top 1.94% in materials and environmental engineering category.

[Figure 2] The photo-generated minority carriers effectively flow into interleaved depletion regions and transport along the externally induced built-in field at 0 V vs RHE. 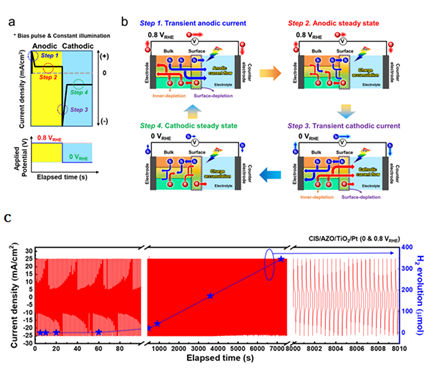 [Figure 3] (a) Sequential steps illustrating one-cycle of current behavior in chronoamperometry result under pulse bias of 0 and 0.8 V vs RHE under light illumination (b) schematic diagrams for charge transport mechanism under constant light illumination from p-n interleaved CIS photoelectrode, where (Steps 1 and 3 ) the high-density charge transport through interleaved depletion regions; and (Steps 2 and 4 ) charge accumulation at the surface region and equilibrium state indicating a saturated steady state. (c) CA results and hydrogen evolution rate of the CIS/AZO/TiO2/Pt photoelectrode at pulse bias of 0 and 0.8 V vs RHE with alternating frequency of 150 cpm (1 M Na2SO4 electrolyte buffered at pH 5 with potassium borate solution) under constant 1 sun light illumination. 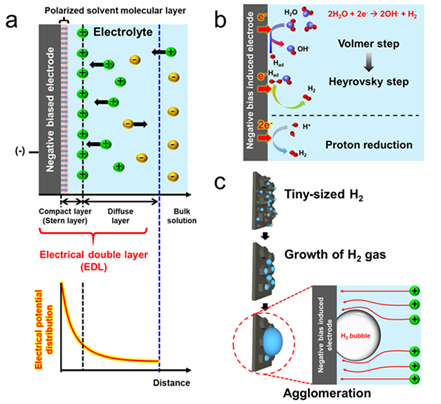